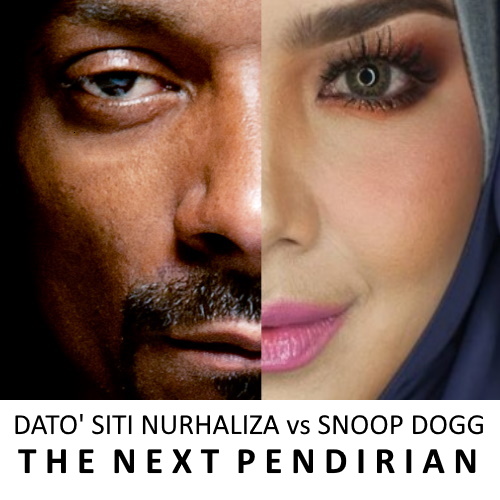 Sashi the funny fella wanted me to mash Siti Nurhaliza and Snoop Dogg in a song. It looked impossible in the beginning until this morning when I woke up post imsak (my body parts can really go on auto pilot and shut off the alarm even though when I’m in REM state). Feeling frustrated that I missed out on the time window to fill up my tummy to make it through the first day of fasting, ideas started to stream about the requested mash. Unlike Audi who recently had the chance to record Malaysia’s pop darling in his studio, I just had to make do with whatever stuff I have on my iPod (which incidentally has now run out of space). So here’s the end result. I call this mix the Sashi Syok Sama Siti Mix. Try saying that out loud a couple of times for effect.

Anybody who knows me will probably know how dangdut music irritates me like how my mashups probably irritate some people that they rather have a sharp pointy thing being shoved into their ears. So this new mashup will probably be the mother of all irritations combined. Over at Facebook (where all the action has been happening apparently), I put up a question asking which song by a Malaysian artist would they like to hear being mashed-up/remixed with a foreign act’s and if workable, I may just do it for real. Christina in all her creative wisecracking wisdom came up with Amelina Dangdut with Sean Paul. Since it was her birthday, I decided to just do it. Here’s Amelina Dangdut’s Rindu mashed with Sean Paul’s Temperature. The first mix was originally over 5 minutes long. It has now been pared down to a torture friendly duration of just slightly over 3 minutes.

At this time of writing, I’m still trying to get Siti Nurhaliza and Snoop Dogg to duet as per Sashi‘s suggestion. Yes, people. I’m taking requests!

Male carbon based bipedal life form capable of operating machines that can perform billions of operations per second without bloodshed. Also capable of producing millions of male reproductive cells on a daily basis without even trying.

Theme by Anders Noren — Up ↑